A friend recently shared online that he was at Day Seven of a flu that had been ‘kicking my butt all week’. With fever, sweats, cough, fatigue, muscle aches. He’s a smart and responsible guy and had RAT-tested himself twice at the onset of his symptoms and assumed because his two RATs were negative and his symptoms were consistent with Influenza A which was known to be present in his areas, it meant it he didn’t have Covid.

I suggested he retest himself (the explanation is below) and he reported a definite and nearly immediate positive: 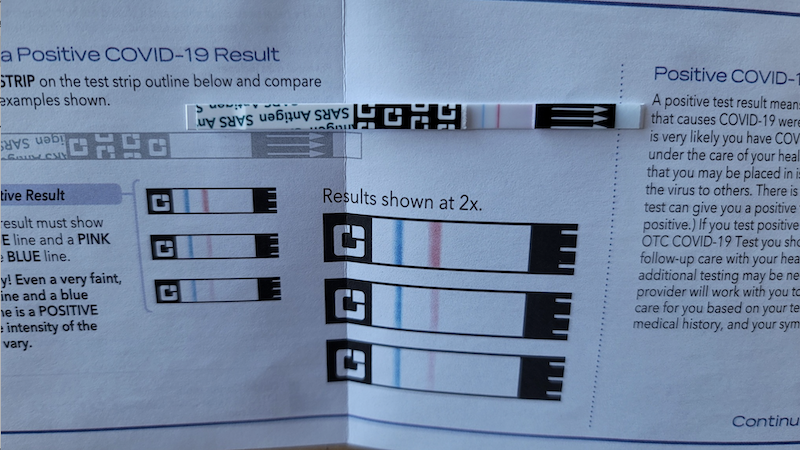 TL;DR version: in the setting of either possible Covid symptoms (fever, cough, fatigue, sore throat, etc.) or possible exposure (attending an indoor event with strangers) one should test multiple times, ideally for 3-5 days after onset of symptoms or after possible exposure. Now for the explanation…

The timing and course of symptoms has changed from the early days.

•    In the pre-vaccination era and when very few individuals had immunity from a prior infection, Covid symptoms began and correlated well with damage to the host by large numbers of replicating virus, That is, the immune-naive person could generally assume that if they were ill and symptomatic with Covid there would be  more than enough virus present to give a positive RAT.
•    However, in vaccinated individuals or those with immunity from a prior infection, a rapid Covid test is often negative during the first couple days of symptoms because the initial symptoms in the immune or partially immune are from the immune system reacting early - which is exactly what we want it to do. In this setting, the RAT often doesn't become positive until several days after symptoms start, and only if there is enough SARS-CoV-2 present to make the individual infectious. The rapid test is very accurate at identifying infected AND INFECTIOUS individuals but it will ‘miss’  some infections in individuals who are not infectious because they have a low viral load.
•    To be safe (and to keep others safe) one should test daily for at least 3 and perhaps 5 days when symptoms start. and on days 3-5 after potential exposure - and act as if one is infected and infectious until ALL those tests are negative. This means staying isolated and wearing a mask at home to protect household members.
•    Here is an image describing this from Michael Mina, a recognized expert in this area: 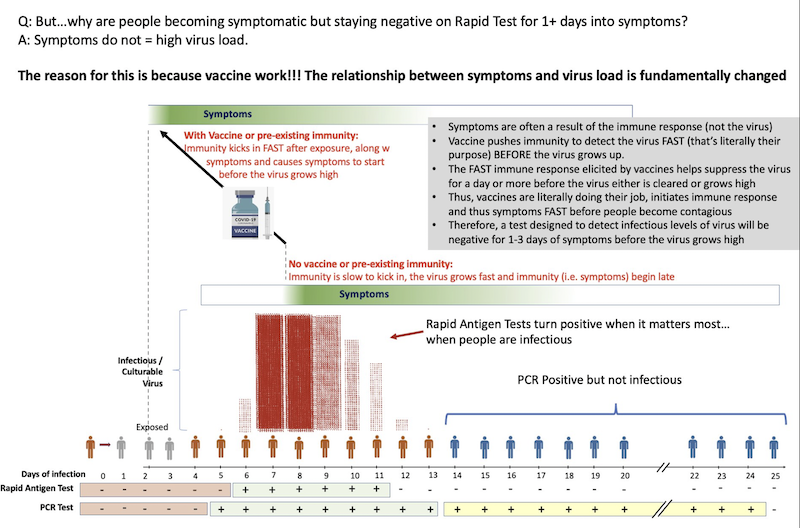 As a side note, the duration of cough is also not a reliable clue as to whether the cause is Covid or something else. Some basic pathophysiology is important. The cells lining the bronchi are 'slow replacers' and take at least 6 weeks to regenerate. Any damage to them (such as a viral bronchitis or pneumonia) can be counted on to cause cough for at least 6 weeks. I used to tell patients with bronchitis to remember the old saying: the song is over but the melody lingers on.

Links to more on this topic:
Medicine
Tags
Covid